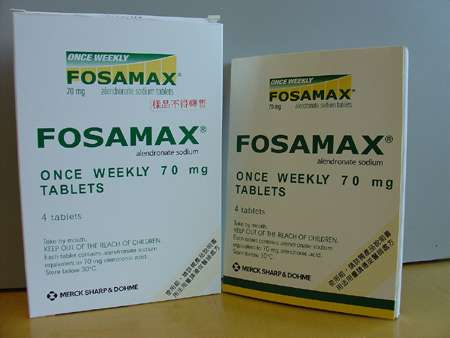 Yes, according to a new study: ONJ in Two Dental Practice-Based Research Network Regions published in the Journal of Dental Research. The abstract is here.

The incidence of osteonecrosis of the jaw (ONJ) in the population is low, but specifics are unknown. Potential risk factors include bisphosphonate treatment, steroid treatment, osteoporosis, and head/neck radiation. This Dental Practice-Based Research Network study estimated ONJ incidence and odds ratios from bisphosphonate exposure and other risk factors using a key word search and manual chart reviews of electronic records for adults aged ≥ 35 yrs enrolled during 1995–2006 in two large health-care organizations. We found 16 ONJ cases among 572,606 cohort members; seven additional cases were identified through dental plan resources. Among 23 cases (0.63 per 100,000 patient years), 20 (87%) had at least one risk factor, and six (26%) had received oral bisphosphonates. Patients with oral bisphosphonates were 15.5 (CI, 6.0–38.7) more likely to have ONJ than non-exposed patients; however, the sparse number of ONJ cases limits firm conclusions and suggests that the absolute risks for ONJ from oral bisphosphonates is low.

Why this study is newsworthy:

A commonly prescribed osteoporosis drug is associated with a slightly elevated risk of developing the rare, but serious condition, osteonecrosis of the jaw; nonetheless the risk remains extremely low.  These findings are published online in the Journal of Dental Research, the official journal of the International and American Associations for Dental Research.  Although the findings are provocative, study authors say they should be carefully considered against the large benefit of these drugs to prevent and treat osteoporosis.

The study was funded by the National Institutes of Health and conducted by researchers from the Kaiser Permanente Center for Health Research and HealthPartners Research Foundation. The study examined medical records from nearly 600,000 patients and is part of the Dental Practice-Based Research Network — a consortium of participating practices and dental organizations committed to advancing knowledge of dental practice and ways to improve it.

“Oral bisphosphonates, usually prescribed for osteoporosis patients, appear to increase the risk of osteonecrosis of the jaw, but the risk is still very low,” said the paper’s lead author, Jeffrey Fellows, PhD, an investigator with the Kaiser Permanente Center for Health Research. “Previous studies suggested that about one percent of oral bisphosphonate users may develop osteonecrosis of the jaw, but our study found a much lower rate, less than one-tenth of one percent. The risk is still real and patients should take necessary precautions, but they shouldn’t be alarmed.”

“These drugs are very helpful in treating osteoporosis and preventing fractures so for the large majority of patients the benefits of taking them far outweigh the small risk found in this study,” says Michael Herson, MD, Chief of Endocrinology and Metabolism, Northwest Permanente Medical Group, which was not involved in the study.  “If patients have questions about taking these drugs they should consult with their physicians.”

Osteonecrosis of the jaw is difficult to treat and occurs when blood flow to the bone is reduced, leaving an area of the jaw bone exposed for longer than 6-8 weeks.  Most cases have been reported in cancer patients taking intravenous bisphosphonates; the risk associated with oral bisphosphonates is less clear. This study attempts to quantify that risk in a large, defined population. It is important to establish what the risk is because bisphosphonates are widely prescribed to osteoporosis patients. According to a 2009 paper in the American Journal of Health-System Pharmacy, 4.7 million Americans are taking oral bisphosphonates.

The new paper published in the Journal of Dental Research examined electronic medical records of 572,606 patients from 1995 to 2006. Researchers found 23 cases of osteonecrosis of the jaw, most among patients who were not taking oral bisphosphonates, but had other risk factors including cancer, head and neck radiation therapy, and osteoporosis.

“Invasive dental procedures may also increase the risk of osteonecrosis of the jaw, so patients who need those procedures may want to get them before starting on oral bisphosphonates,” said Dr. Daniel Pihlstrom, a co-author on the study and associate director for Evidence Based Care and Oral Health Research at Permanente Dental Associates.  “Patients who are already taking these drugs don’t need to stop in order to get dental care, but if they need an invasive dental procedure they should inform their dentist or oral surgeon that they are taking the drugs,” added Pihlstrom.

The authors caution that their confidence in the association between oral bisphosphonates and osteonecrosis of the jaw is limited because they found so few cases. The small number of cases also limited their ability to control for other risk factors.  Also, since osteonecrosis of the jaw did not have a diagnosis code before 2007, the authors used a computer program to search medical records for any diagnosis, procedure, or physician chart note that could indicate a possible case. Manual chart review was used to confirm osteonecrosis of the jaw among patients identified by the computer. Some additional cases were found through conversations with general dentists and oral surgeons serving patients from each health care organization. While the search was extensive, there is a chance that some cases were missed.

The study was supported by grants DE-16746 and DE-16747 from the National Institutes of Health. Authors of the paper include Jeffrey L. Fellows, PhD, and Christine M. Gullion, PhD, from the Kaiser Permanente Center for Health Research in Portland, Ore.;  Daniel J. Pihlstrom, DDS, with Permanente Dental Associates in Portland; D. Brad Rindal, DDS, and William Rush, PhD, with HealthPartners Research Foundation in Minneapolis; Andrei Barasch, DMD, MDSc., with the Department of General Dental Sciences, University of Alabama at Birmingham; and Joshua Richman, MD, PhD, with the Division of Preventive Medicine, University of Alabama at Birmingham.

This is better news for patients (low incidence of jaw osteonecrosis) taking oral bisphosphonates than the 2009 study which I posted here.

However, it is wise for patients and dentists to be prudent: Flap urges caution for patients taking ORAL Bisphosphonate medications. And,please patients update your health history and tell your dentist if you are using these drugs.

New Dentistry Cause for Alarm for Patients Who Use Bisphosphonates – Fosamax, Actonel, Boniva?