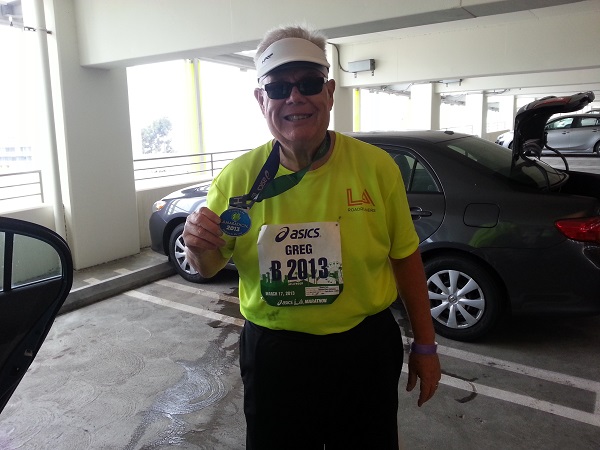 It was the last Saturday in February and the longest run before the 2013 Los Angeles Marathon.

This run with Los Angeles Roadrunners Run/Walk 5 was to be the dress rehearsal for the race which loomed on March 17.

Weather was favorably cool, the body was stuffed with carbohydrates all week and I was ready.

The main question lingered in my mind: would  I be able to stay with and finish with the group? I wasn’t so sure.

The pace at the beginning of the run was quick down the Speedway alley in Venice. This is how it would be on marathon day since the pent up adrenaline and crush of racers would force the group to run more towards a 14 minute per mile pace than the customary 15 pace.

Up the Santa Monica Pier and Georgina Street. The hills were challenging, but I engaged members of the group, including fellow dentist, Flavia,  and put the climb out of my mind.

Down we went on San Vicente and around the golf course where there are more hills and the miles were increasing. It was warming up.

I found myself running with Doug, a man about my age and who was as interesting as his career was varied. We talked about his time in the United States Marines and his tour in Viet Nam. He, at a very young age was a Marine Embassy Guard and was one of the last evacuees from the American Embassy when Vietnam fell to the Communist North.

Walt even engaged the conversation and we had plenty of questions of Doug.

The hills and miles melted away with absorbing conversation.

We had some excitement off of Bundy Drive when our pace leader, Nancy, fell. She tripped on what I term “Heartbreak Hill.” She broke her glasses and bruised her head pretty good, but she continued. Walt relieved her of pace leading for the rest of the day. Nancy wanted to continue!

Back up San Vicente to 26th Street.

The group usually would run the grass median strip down the center of the street. But, a group of us, wanted to have nothing to do with the roots and uneven surface. No twisted ankles for us.

Janet and I lead the group down San Vicente towards Ocean Avenue on the sidewalk. We used a 1:1 run/walk ratio since the others would be going slower on the grass.

I was determined to not “bonk” out by running too fast down back to the Flag Poles in Venice. Janet held me back and we were safely reunited with the group near the water station on Ocean and the totem pole area.

The remaining four miles or so went uneventful and I finished with the group.

It was a good day!

Two more Saturday sessions and the taper before the race.

We returned to Dodger Stadium the next week for an additional session of the Elysian Park hills. I remembered the Stadium to the Sea marathon course hills and they are relentless. 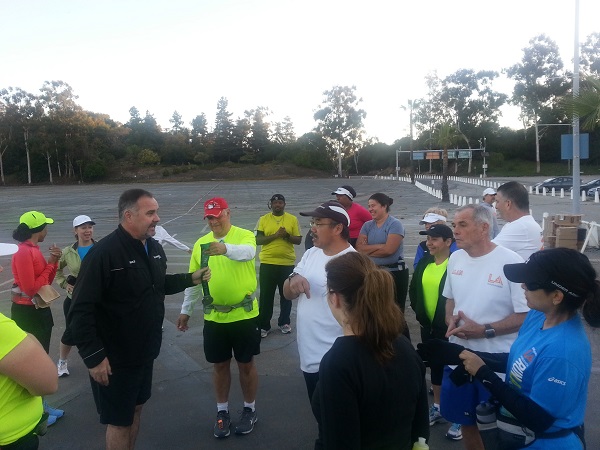 Before beginning the hills, Nick Curl, Los Angeles Marathon Race Director showed off the 2013 medal. We also ran over to the Loge section (third base side) where we would all hang out prior to the beginning of the marathon – a special perk for the Roadrunners. We would have our own place to sit and relax, plus our own pre-race bathrooms = very important. 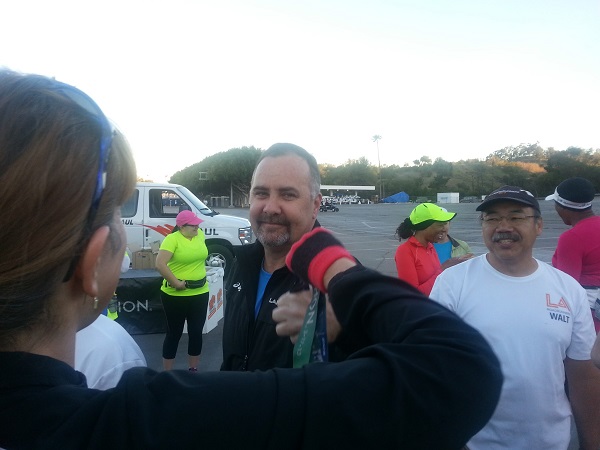 After seeing the entrance to our private Dodger Stadium area and dodging the massive amounts of construction happening at the stadium we took off.

I was breathing hard at the finish, but considering that last year I could not run one mile of hills with the group, I was happy.

And, we went to Walt’s studio for brunch! Bagels…. 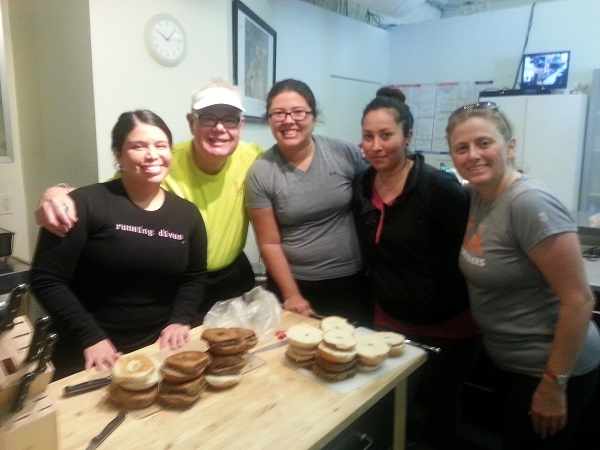 Next Saturday was the last training session = a tapering day of only six miles. But…. most important = picture day!