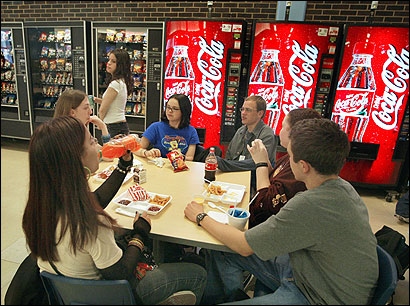 Although the ban significantly cut down on student-reported access at school, about 85% of students reported having at least one soda or other sweet drink in the prior week whether they could get the beverages at school or not, Daniel R. Taber, PhD, MPH, of the University of Illinois at Chicago, and colleagues reported.

Bans on soda only had even less impact.

These results from surveys at schools across 40 states appeared online in the Archives of Pediatrics & Adolescent Medicine.

“School is only one aspect of a child’s environment,” Taber’s group noted, “and youth have proven to be very adept at compensating for individual changes to their environment.”

The Institute of Medicine and other organizations have urged a universal ban on selling or providing sweetened beverages at school, with the rationale that limiting access at school should reduce overall consumption because students spend a large portion of their day there.

But students who reported at least daily consumption actually slightly increased their intake when the drinks were banned at school, suggesting that they more than compensated with drinks purchased at convenience stores and other locations, the researchers pointed out.

“Any impact of state school-based sugar-sweetened beverages policies on youth dietary consumption may be modest without changes in other policy sectors,” Taber and colleagues wrote.

Schools have to accompany the ban on the selling of sodas with a comprehensive education plan that delineates the problems with obesity and the role of sugary drinks. Of course, the students will simply wait until 2:30 PM and then head to the nearby store and drink their daily sodas or energy drinks.

While I do think a ban on sugary drinks, especially at elementary schools is appropriate, if it is a ban only approach, the change in behavior of drinking more healthy products will not be realized.

It is all about teaching the students what drinking too much soda and energy drinks will do to your health – especially your teeth.

One thought on “Banning Soda at School Ineffective In Curbing Consumption?”