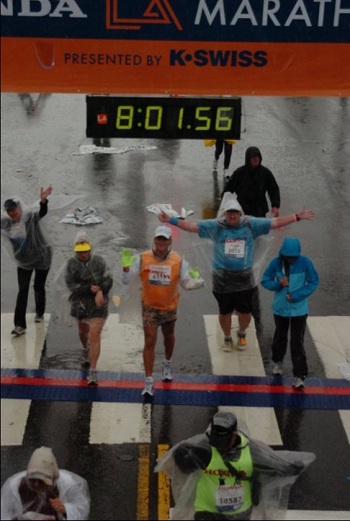 This is me finishing the Los Angeles Marathon in 2011

No, according to a new study.

Despite well-publicized stories of people dropping dead during or after running a marathon, the race isn’t all that risky, researchers found.

Among nearly 11 million marathoners and half-marathoners, only 59 went into cardiac arrest during a race, for an incidence rate of just 0.54 per 100,000 participants, Aaron Baggish, MD, of Massachusetts General Hospital in Boston, and colleagues reported in the New England Journal of Medicine.

“Event rates among marathon and half-marathon runners are relatively low, as compared with other athletic populations, including collegiate athletes, triathlon participants, and previously healthy middle-aged joggers,” they wrote.

Men, however, were more likely to have an event than women, they noted.

In 2010, about two million people around the U.S. ran long-distance races, a figure that more than doubled from 10 years prior. But that growth has been accompanied by a rise in race-related heart problems and in news headlines about the risk of sudden death.

So the researchers created the Race Associated Cardiac Arrest Event Registry (RACER) to assess the incidence and outcomes of cardiac arrest associated with long-distance races in the U.S. between Jan. 1, 2000 and May 31, 2010.

The database included a total of 10.9 million runners; only 59 had suffered a cardiac arrest, for an overall incidence rate of 0.54 per 100,000 participants, the researchers reported. Their median age was 42.

A total of 71% of those cases were fatal.

I will be run/walk/running my 8th Los Angeles Marathon on March 18th.

By the way, I have already been cleared to run the race by my physician.