While the official Roadrunner’s schedule takes the Christmas and New Year’s holidays lightly = “on your own” training, I had my own schedule to prepare for the long, long runs and the Dodger Stadium hill training which were in the near future.

The first Saturday training run in January went well. It was fifteen miles and I was able to hang with the group. All was going according to the plan.

I had a health issue which was unrelated to running.

While the surgical procedure, under anesthesia, went well, I had to miss the next Saturday long run (14 miles, a cutback week) and all mid-week runs.

My marathon season was in jeopardy.

I made backup training plans and even decided to run another marathon such as San Diego in June, if I was not able to resume training soon enough.

Luckily, I healed quickly and my physician released me to run seven days later.

The next Saturday long run scheduled was 18 miles – around the golf course and down to Bundy. I could do this – even with my lack of training. Right?

It was an unusually hot January day and I made two errors during the run.

The first was to respect the heat since my Norwegian heritage, light skin, whatever makes it difficult for me to run with pace.

The second was to think that I could run fast down San Vicente (ahead of the group) at an accelerated pace and not “BONK” out. I lead the San Vicente “sidewalk” group in a 1:1 down the soon to be marathon 24th and 25th mile with Janet.

Janet and I separated from the main group and kept going down along the beach and Ocean Avenue. This was to be repeated on marathon race day – but more on that later.

The heat and lack of glycogen got me.

I bonked out around 16.5 miles and stopped at the Santa Monica Senior Center and was picked up by friend Tara. Janet continued on and finished in the heat.

I didn’t make it the entire way, but with my illness, I will take it.

The next week was fourteen miles = a piece of cake. And…..R/W 5 was having a social on Sunday with Walt at the Golden Dragon in Los Angeles’ Chinatown.

Walt likes the Golden Dragon. I like Asian cuisine, although Alice will say NO that I don’t like anything that isn’t on my regimented runner’s diet. 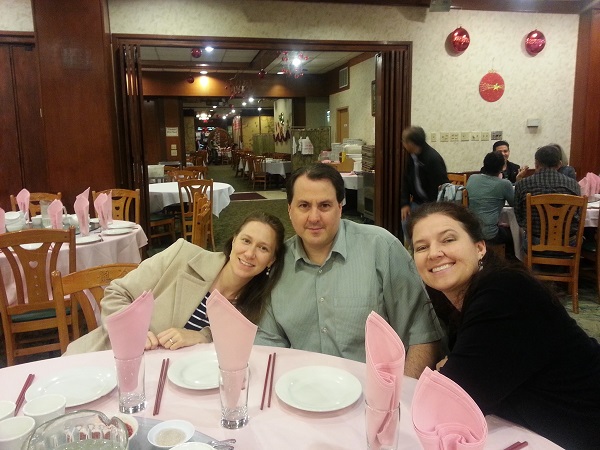 I, especially, like the chicken with the head left on so I can annoy Mary and Nancy!

It was a nice sized group of R/W 5 folks and we stocked up on calories since our first 20 mile training run was coming up in just six days. 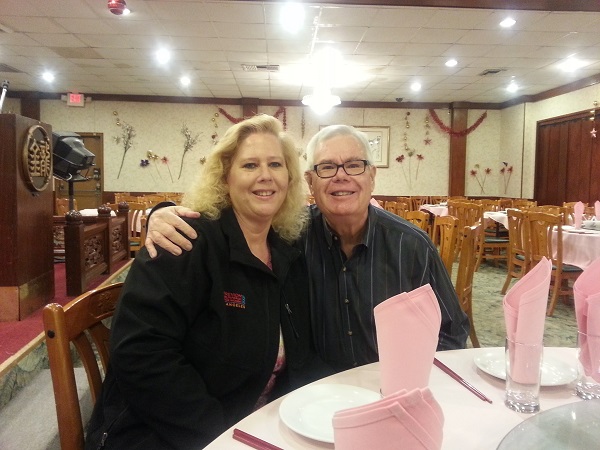 Alice and my mouth which is watering for the first course

I approached the next week with apprehension. I bonked out at 16.5 miles. How could I make 20 miles?

The first Saturday in February was our first twenty mile run of the season.

Down the alley, back to the Santa Monica Pier, up Georgina, down San Vicente, around the golf course, down to Bundy, up the Heartbreak Hill at Bundy, back up San Vicente, down San Vicente from 26th Street, down Ocean along the beach and back home to the Flag Poles in Venice.

I ran with the group for about 17.5 miles (at pace) and then walked to compleete the full 20 mile distance. I kind of bonked out at mile 17, but accepted the result.

Next, week was our first Dodger Stadium Hill training session and brunch at Walt’s studios.  We were to run the hilly course of 5K three times around.

In previous training years, I could not run the course one time with the R/W 5 group – now, it was to be 3 times!

I didn’t think I could hang with everyone, but would at least do the distance. 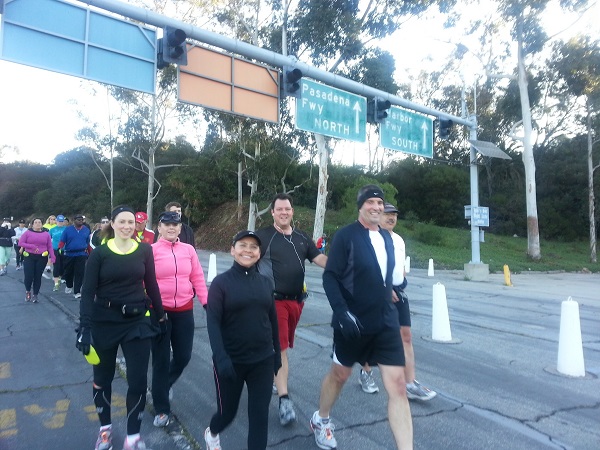 How long could I hang with the group?

Surprisingly, I hung in there and finished the three loops around Elysian Park. I felt that my energy. per-health crisis was returning and was encourged. 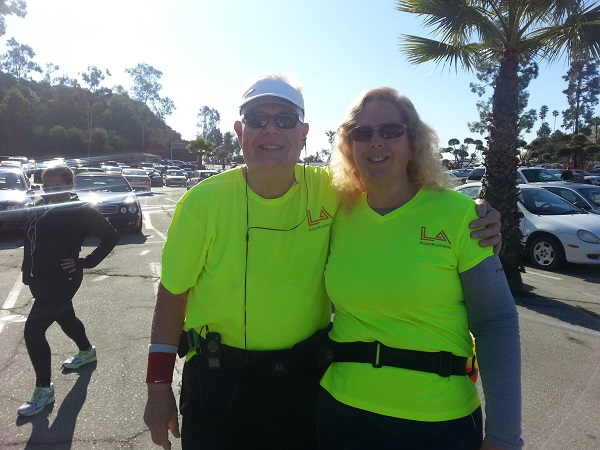 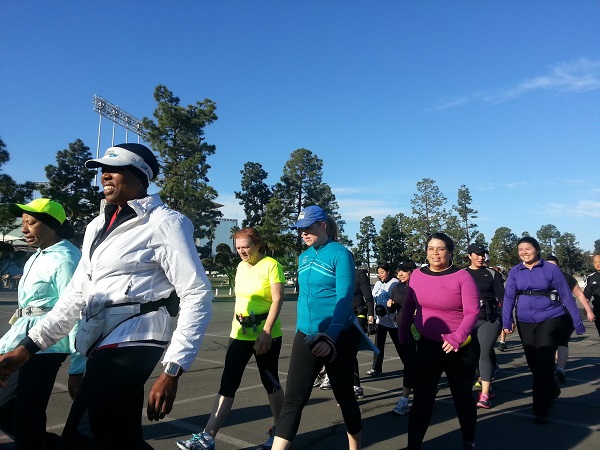 Run/Walk 5 on a walk break – going the other way!

After the Dodger Stadium hill training sessions, Walt hosts the entire group at his studio which is nearby. 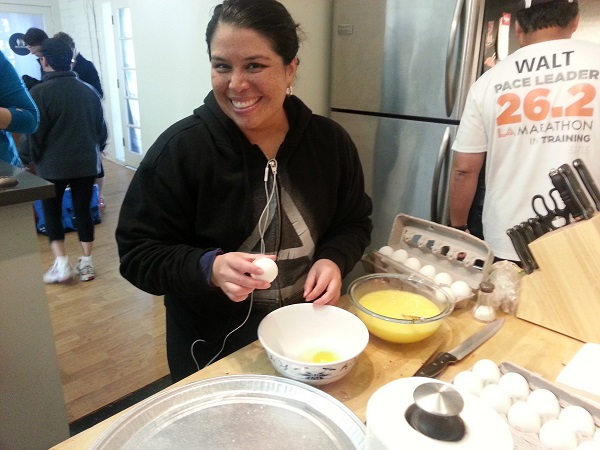 Janet beating the eggs into submission 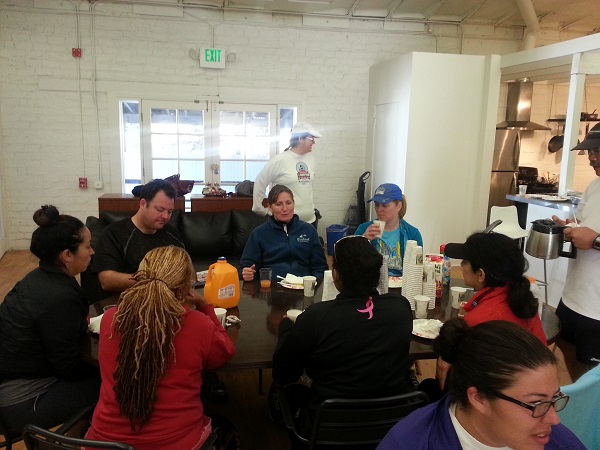 The following Saturday was a cut back ten miler = a piece of cake and time for some photos. 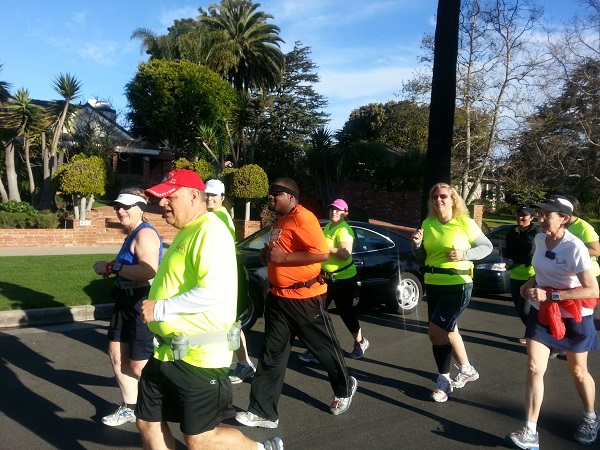 One of the Run/Walk 5 traditions is to do a “WAVE” down the Santa Monica Pier and otherwise other downhill spots. This year there was no hesitation! 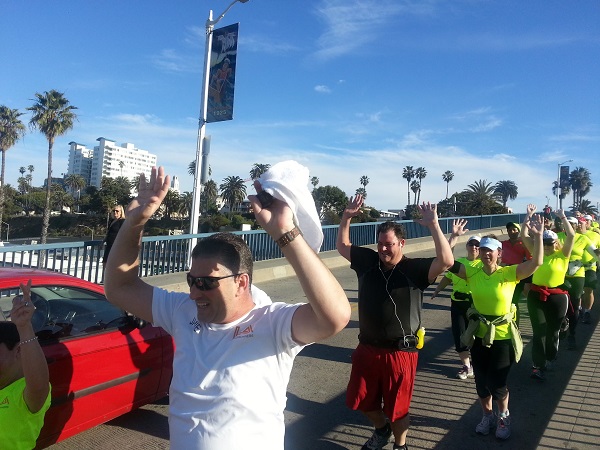 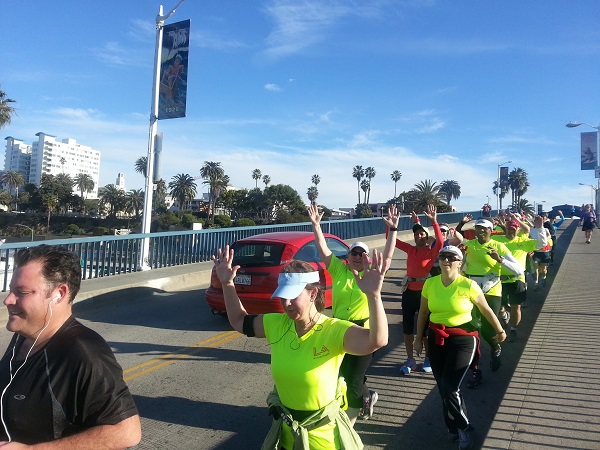 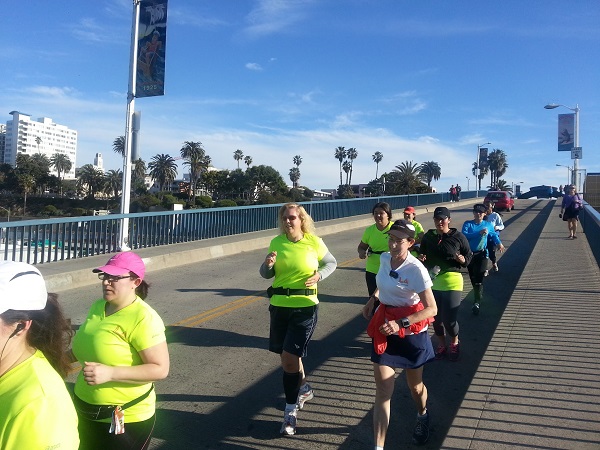 I was feeling stronger and the week day runs passed by quickly.

I carbo loaded a few days before the run and was ready.

But, my doubts continued to linger. Did I have this?