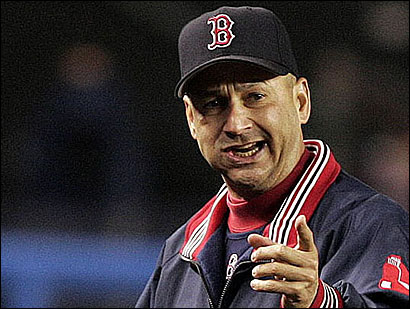 Well, this is a start and those that sought a complete ban do not live in the real world.

Baseball’s new labor deal will limit the use of smokeless tobacco by players, but not ban it during games, as some public health groups had sought.

A baseball union summary obtained by The Associated Press says that players have agreed not to carry tobacco packages and tins in their back pockets or use tobacco during pregame or postgame interviews, and at team functions.

But it falls short of the call by some advocates, including members of Congress, who argued that a ban on chewing tobacco and dip during games was needed to protect impressionable kids watching on TV.

“Our members understand that this is a dangerous product, there are serious risks associated with using it,” union head Michael Weiner told The Associated Press. “Our players felt strongly that those were appropriate measures to take but that banning its use on the field was not appropriate under the circumstances.”

The players union has also agreed to join forces with the Partnership at DrugFree.org to create a nationwide public service announcement campaign. In addition, several players have agreed to a public outreach campaign, including Curtis Granderson, Jeremy Guthrie and C.J. Wilson. The union will start a Tobacco Cessation Center for its players, and players will be provided with training on how to give up the habit.

Let’s hope this is a logical step in beginning an outright ban of smokeless tobacco for Major League baseball players. In the minor baseball leagues, smokeless tobacoo has been banned since 1993.

The handwriting is on the wall for baseball’s elite players – QUIT – for better health!

The federal Centers for Disease Control and Prevention says smokeless tobacco can cause cancer, oral health problems and nicotine addiction, and stresses it is not a safe alternative to smoking. Despite the risks, the CDC’s most recent survey found that in 2009, 15 percent of high school boys used smokeless tobacco — a more than one-third increase over 2003.