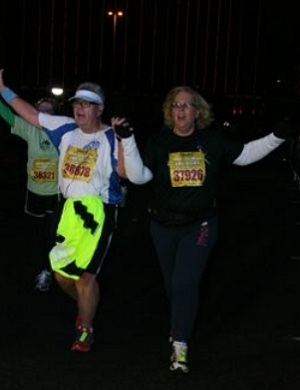 Alice and I hand in hand finishing the 13.1 Miler in Las Vegas this past Sunday

Alice, Tara and I headed out for the Las Vegas Half Marathon weekend on Friday AM and with stops at the Starbucks in Barstow (Lenwood) and a mid-way rest stop arrived in Sin City mid-afternoonish. We immediately headed to the Sands Convention Center for the pre-race Expo. We knew it would be a zoo there and it was.

We bought the obligatory race gear, ate a few free samples and then got the hell out of there before the real crowds arrived late in the afternoon. Here is a photo both Alice and Tara thought was funny. I was not so sure: 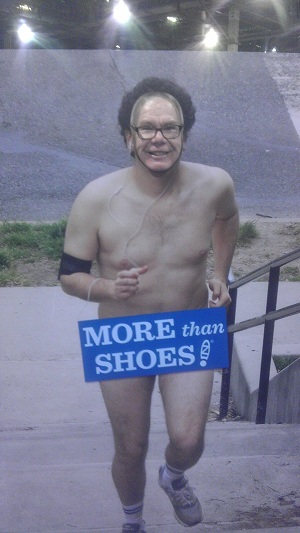 Tara was so kind to invite us to stay with her at her mother’s time share at the Cancun Resort on the Las Vegas Strip about 5 miles south of the Half Marathon start line outside the Mandalay Bay Hotel and Casino.

Saturday was a rest day and rest it was. Also, it was time for carbo loading and we obliged with some yummy donuts among some other carbohydrate rich foods e.g. candy and bagels.

Since the race began at 5:30 PM, we had more than half the day to rest and/or fret about the race.

But, the time arrived and we drove off towards the Mandalay Bay. Here we were jacked around for about an hour trying to discover a place to park. We were turned away from three parking lots by armed security guards telling us that parking was for their guests only.

We finally made it to the corrals and just in time. Here are a couple of quick, albeit dark photos: 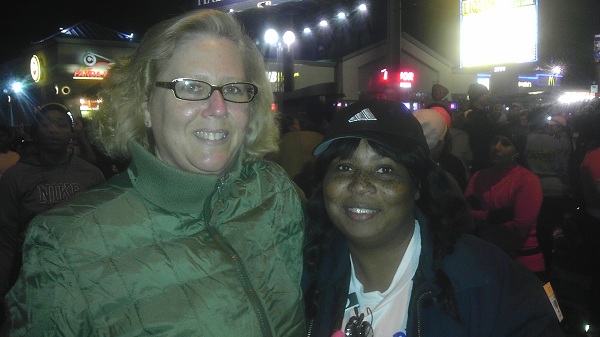 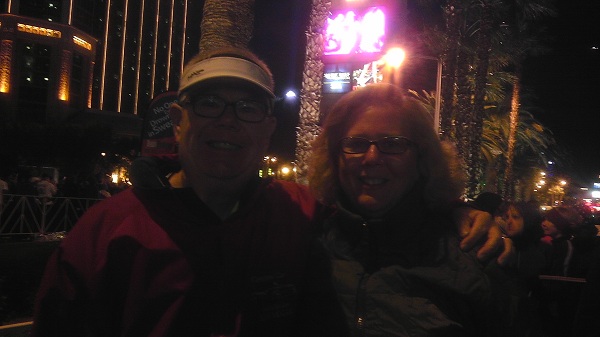 Some good looking runner looking for the sun (why the visor?) and Alice

The race started and only about 40 plus minutes went by before we crossed the start line (groan). Remember there were over 35K participants although more registered. the number the race promoters kept using was 44K, but I don’t know if that was correct.

BUT….. there were many people there.

The first five miles we dodged all of the slower walkers and finally were able to separate ourselves from the pack. Here is a photo of the strip – notice the motion: 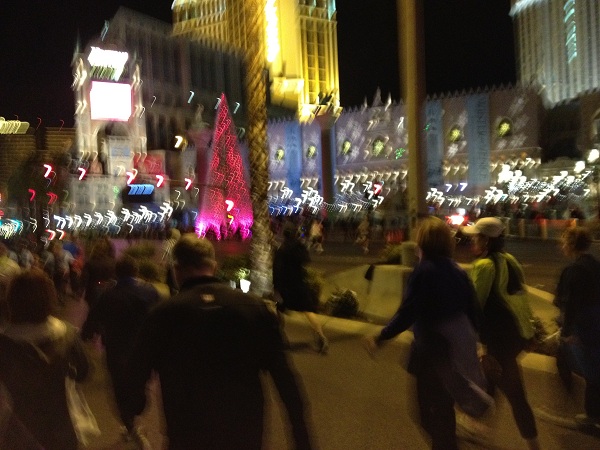 Nice Christmas tree outside The Venetian

This was a crowded race and the entire half marathon consisted of avoiding other participants – elbows, bodies, discarded water cups, etc. But, hey, I knew there would be many participants, so I just dodged them and threw a few elbows myself.

Around mile 9 Tara’s back and hip problems were hurting her too much to sustain our pace, so she set Alice and me free. I was feeling pretty good and with the weather ideal for running (yeah, it was cool, cold) I eyed a PR.

I took off and made that PR time:

Here is the result:

Yeah, I am not a fast runner but from where I have come, I will take the time.

Alice and I finished together and here is another photo: 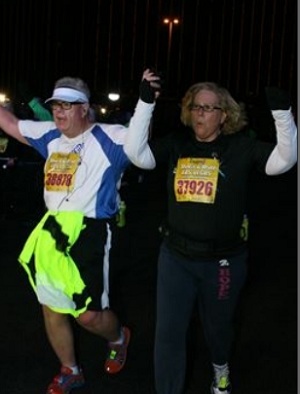 We crossed the line and received our medal. Thank God, since they later ran out. We had this photo taken: 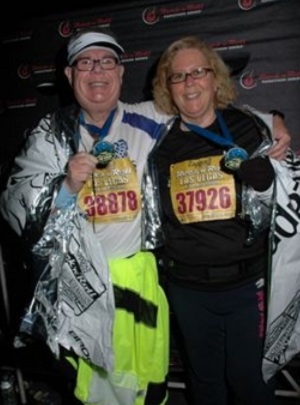 We waited awhile, got a chill and decided to meet up with Tara inside the Mandalay Bay Hotel.

She finished a little while later and received a Marathon Medal since they ran out of Half Marathon ones. Our medal is blue and Tara’s is pink. Both glow in the dark.

Then…… we walked another hour back to our car (about a 5K) and collapsed back at the Cancun. Alice made pizza and after eating and a shower, this old guy went to bed a little after midnight.

Next race will be the Los Angeles Marathon in March 2012.

And…. we will return to Las Vegas next year. We all enjoyed our time and have vowed to spend a few more days prior and a few days more after the race in 2012.