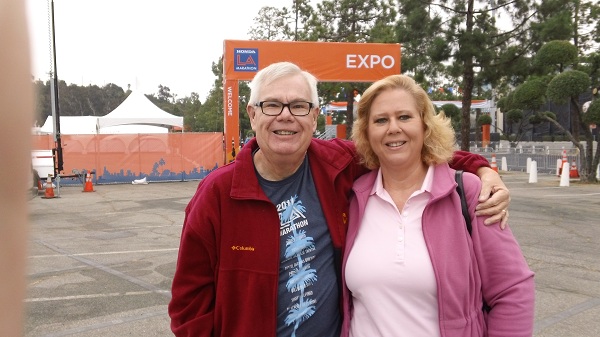 My wife, Alice and me

On Friday, March 16, Alice and I headed out to Los Angeles Dodger Stadium in Elysian Park, California to pick up our 2012 Los Angeles Marathon racing bib, t-shirt and goodie bag. Traffic wasn’t bad and we made it there a little before 10 AM. This was the appointed time to meet up with our Los Angeles Roadrunner and Los Angeles Running Club friends.

As we made our way to the I-5 from the 101, the request came out for Starbucks. Normally, I am enthusiastic but was anxious to get to the Expo – so I was a little ambivalent. Alice thought I was maybe getting sick.

We found a Starbucks on Glendale Blvd and after navigating the horrendous parking lot, we went in. Of course, I instantly went to the restroom, but soon returned to the coffee ordering line. Behind me though was standing someone who looked familiar to me.

My running friends know I am always commenting on other runners and walkers in Santa Monica and Venice that they are either movie or television actors and actresses. I even have some hits like former California Governor Arnold Schwarzenegger, his soon to be ex-wife Maria Shriver (they were not together), professional poker player Alan Cunningham.

Who was this fellow behind me in the Starbucks line?

Can you recognize him? 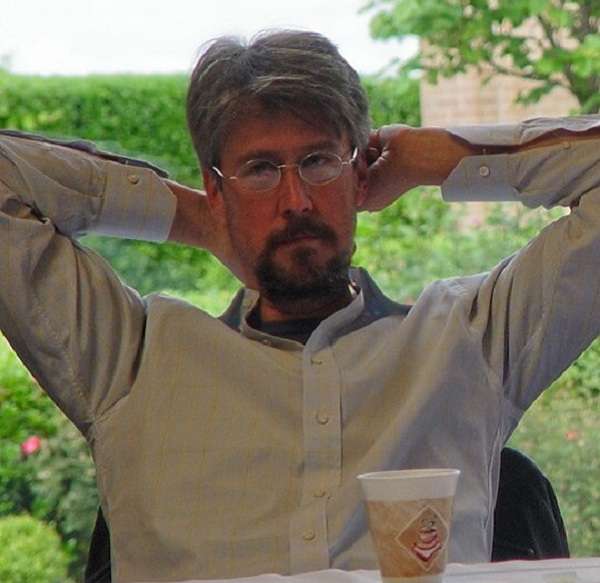 The actor’s name is Allan Ruck and he has been on a number of shows, including Ferris Bueller’s Day Off, Star Trek, Spin City and Persons Unknown.

I said, I know I have seen your work, but I am sorry that I cannot place you. He said that his most famous run was on Spin City quite a few years ago and that he wasn’t doing too much lately. But, he said his wife was (Mireille Enos) and asked me if I had seen “The Killing” on AMC. I lied a little and said I had, but maybe had seen it in ads and just in passing.

After moving from the line and obtaining my coffee, I moved over the the cream and sweetener area and he introduced himself as Allan and said I should check out “The Killing” and that the word is that his wife’s series is even better in season two which is starting in April.

I thought to myself, that I have all day tomorrow to rest up before the Los Angeles Marathon and would check it out On Demand or Online. Little did I know what a great show, “The Killing” is and that his wife was nominated for an Emmy as best actress.

We left Starbucks, arrived at Dodger Stadium and met up with friends Nancy and Tara: 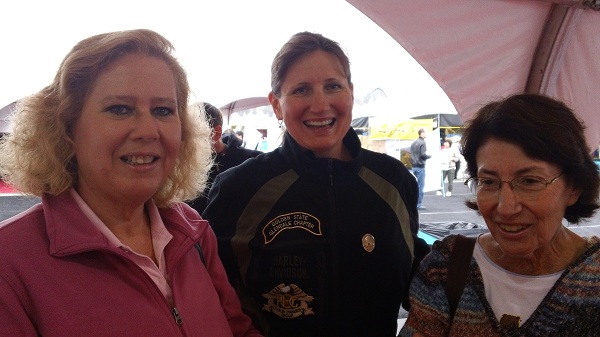 We stopped to find our names on the Honda Marathon Cars: 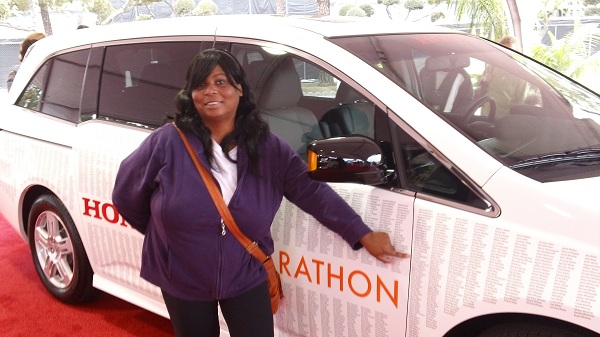 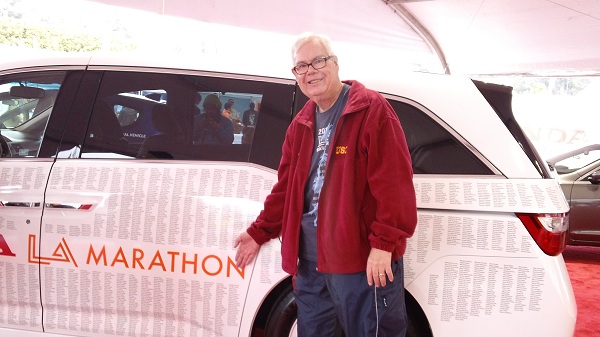 Found my name too

Next, off to get our racing bibs: 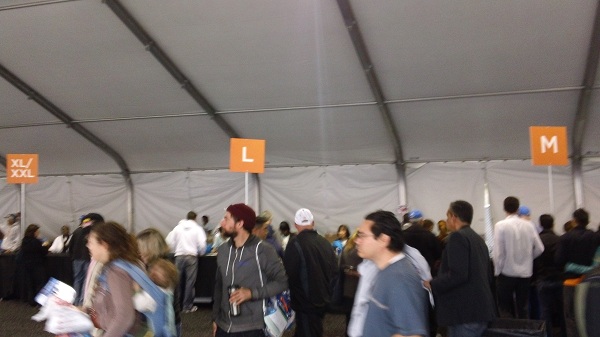 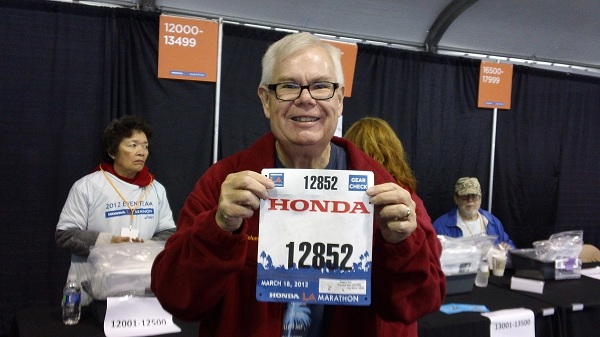 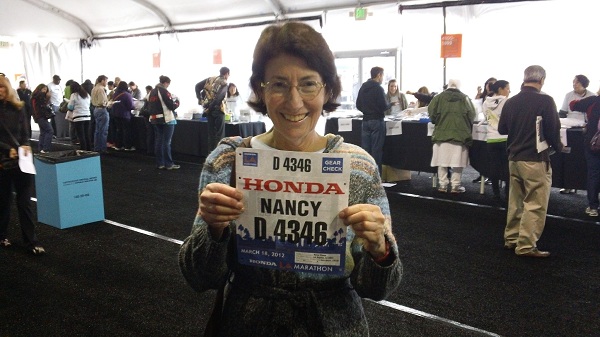 Nancy and her bib 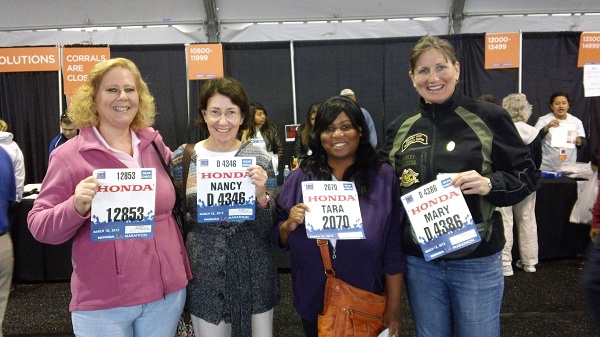 You receive a free t-shirt with running the marathon, but there is an obligatory stop at the official marathon store: 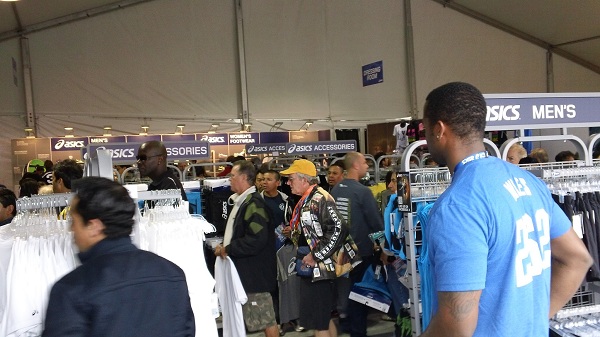 After shopping, we saw some other LA Roadrunner friends: 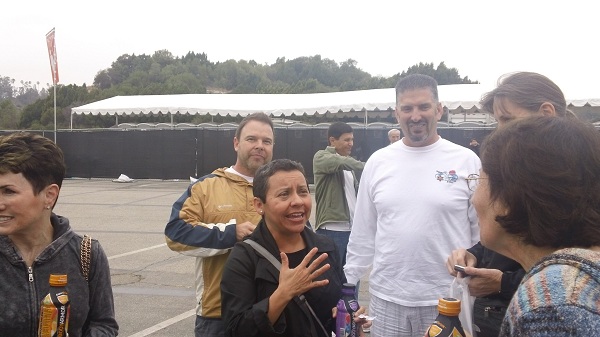 We then all walked around the Expo some, ate some pretzels and then departed for a nice carbohydrate rich lunch at Taix French Restaurant. We even had birthday cake for Tara who celebrated her birthday earlier in the week.

Tara and I would note that while racing on Sunday, we would pass the restaurant again! 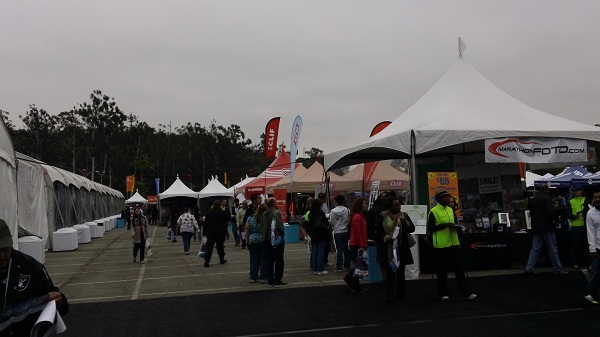 Walking around the Expo

We all left, departed from home and I prepared on Saturday to have a nice relaxing day doing absolutely nothing, besides drinking Gatorade and eating carbohydrate rich foods.

On early Saturday morning, I received a text from my daughter’s husband, Nathan, her water had broken and they were preparing to deliver my first grandson, James Phillip soon.

We hastily made our way to San Diego. 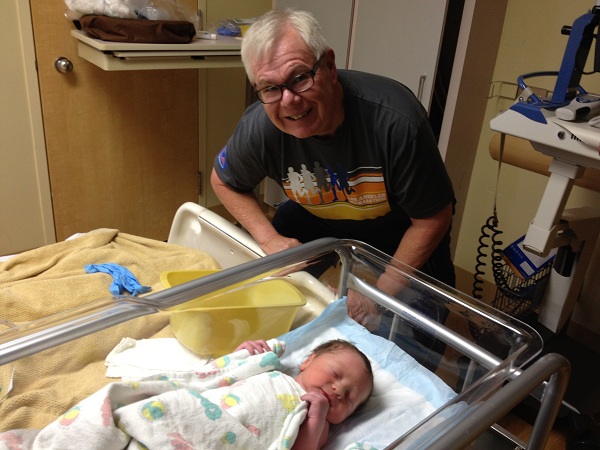 Alice drove back to Thousand Oaks, we went to bed and prepared to race the Los Angeles Marathon in a few hours = the next post.