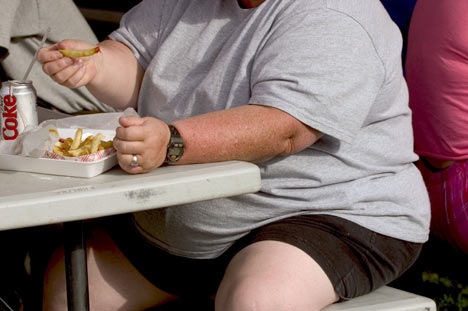 Apparently yes according to a new study.

Overweight adults eat less often than people in the normal body weight range, but still take in more calories and are less active over the course of the day, according to a U.S. study.

By contrast, normal weight adults, including those who had lost a lot of weight and kept it off, ate more often, according to findings published in the Journal of the American Dietetic Association.

“Most of the research has shown that people who eat more frequently have a lower weight. But no one knows why,” said lead researcher Jessica Bachman, an assistant professor in the department of Nutrition and Dietetics at Marywood University in Scranton, Pennsylvania.

More than 60 percent of U.S. residents are obese or overweight, but the relationship between the number of meals people eat each day and the ability to maintain weight loss has remained unclear, she said.

I do know that when I weighed over 300 pounds I did not eat breakfast but would binge eat one or two times during the day. Whereas, today, when I weigh about 240 and want to lose an additional 50 pounds, I eat more often and measure the calories carefully.

The level of satiation is no different, although I do know now when I need some protein.

On average, the normal weight subjects ate three meals and a little over two snacks each day, whereas the overweight group averaged three meals and just over one snack a day.

Generally, though, weight loss “maintainers” consumed the fewest calories, at about 1,800 a day, compared with the normal weight and overweight subjects, who took in 1,900 and more than 2,000 calories a day, respectively.

One thought on “Do Overweight People Eat LESS Often?”