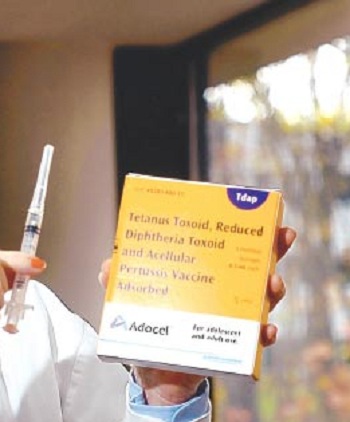 Yes, and dentists should also have their Hepatitis B antibodies monitored.

Read this excellent piece and it explains.

The Italian study also assessed the impact of flu shots and found that while occupational influenza risk among dentists is high, dentists who receive a flu vaccine have half the absenteeism rates of nonvaccinated dentists for influenza-like illness and lower rates of recurrence. Even so, fewer than half of the dentists in the study reported receiving annual flu vaccines.

In the U.S., 10% to 20% of the population becomes infected with the flu each year. Transmission of influenza is possible for 24 hours or more before the sick person shows any symptoms.

“Other than hepatitis B, it’s all about droplets,” J. Michael Hitt, MD, an occupational medicine physician at the University of Arizona, told DrBicuspid.com. “Dental staff are bathed in droplets on a daily basis. Face shields, masks, and gloves are a big help, but innate immunity (by vaccination) will seal the deal.”

Pertussis is another infectious disease that dental care professionals should be prepared for. Based on studies that look at reporting rates, pertussis is estimated to affect 600,000 U.S. adults ages 20-64 annually, and epidemics occur in the U.S. every three to five years, according to the U.S. Centers for Disease Control and Prevention (CDC). In 2010, cases of pertussis in California reached the highest reported rate since 1947, and reported cases also rose significantly in Michigan and Ohio, according to the CDC.

For me, I have already been vaccinated against influenza. Remember I was hospitalized for four days a few years ago with the flu and it was not a pleasant experience.

I will return to my physician’s office for my Tdap injection after I run the Las Vegas Half Marathon on December 4th.

One thought on “Should Dentists Be Vaccinated Against Influenza and Pertussis?”