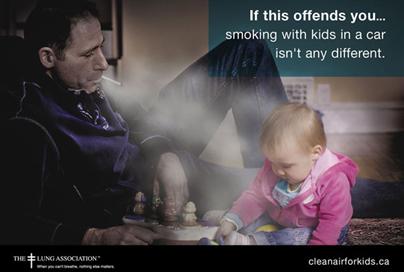 A confined area and exposure to toxic posions, what could possibly go wrong? Plenty…..

The British Medical Association is calling on the government to ban smoking at all times in cars, a step that would go beyond regulations elsewhere.

In research released on Wednesday, the group that represents U.K. doctors said the confined environment in cars exposes drivers and passengers to 23 times more toxins than a smoky bar. Children are particularly vulnerable to second-hand smoke since they absorb more pollutants. Smoke can linger in cars long after cigarettes have been smoked.

In countries including Australia, Canada, and parts of the U.S., smoking in cars is banned when children are present. In the U.K., smoking in public vehicles like buses and trains is banned but there is no law against smoking in private cars.

The problem with such bans, as with the cell phone ban is enforcement. What cop has the time to stop everyone with smoke coming out of their window.

But, education as to how smoking in cars is so bad for your health is a good thing.

One thought on “U.K Doctors Call for Car Smoking Ban”