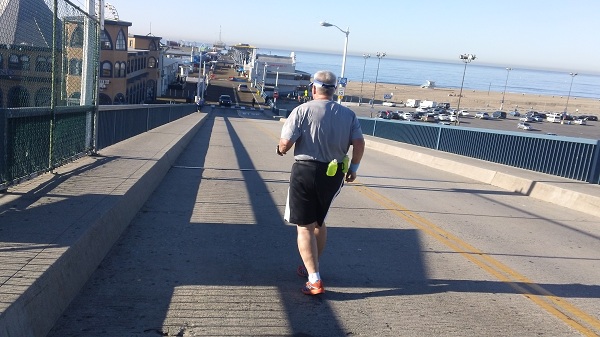 Here I am running down the Santa Monica Pier

This study is literally running from the reaper – well, sort of.

Alzheimer’s disease, with its inexorable loss of memory and self, understandably alarms most of us. This is especially so since, at the moment, there are no cures for the condition and few promising drug treatments. But a cautiously encouraging new study from The Archives of Neurology suggests that for some people, a daily walk or jog could alter the risk of developing Alzheimer’s or change the course of the disease if it begins.

For the experiment, researchers at Washington University in St. Louis recruited 201 adults, ages 45 to 88, who were part of a continuing study at the university’s Knight Alzheimer’s Disease Research Center. Some of the participants had a family history of Alzheimer’s, but none, as the study began, showed clinical symptoms of the disease. They performed well on tests of memory and thinking. “They were, as far as we could determine, cognitively normal,” says Denise Head, an associate professor of psychology at Washington University who led the study.

All of those “LONG” runs, don’t see as arduous now!

In any case, there are many benefits of exercise and this may be just one of them.